While still not quite as popular as other Niantic titles like Pokemon Go, Harry Potter: Wizards Unite’s following and popularity isn’t anything to sneeze at and this game has no doubt popularised the Harry Potter franchise.

The game was launched on June 21, 2019 and since then, we’ve seen it bag update after update, getting new features with each iteration. Along with these features, the game has also been getting bug fixes to the inevitable issues that afflict such popular online gaming titles.

One of the long-standing issues that has been afflicting players on Android has to do with the Wizards Unite Adventure Sync feature. According to affected persons, the issue prevents distance from being counted when the app is not open.

Back in March, this issue was officially acknowledged and later, we saw reports that it had been fixed in a build that rolled out in April, update 2.17.0, at least according to the changelog. Sadly though, the problem still persisted as more players who had updated to the said build kept on reporting facing the same predicament.

Fast forward to July 27 and Niantic was at it again, taking another swipe at this with the rollout of Harry Potter: Wizards Unite version 2.18.0, an update that was set to address a bunch of bugs. Again, players kept on reporting facing an issue with the Adventure Sync on their Android setups, noting that the distance wasn’t being counted when the app wasn’t open.

@NianticHelp for the 1920’s event? Will the portkey’s be working again? Or id it still bugged and count it only the distance when the game is open?
Source

In recognition of this issue, Niantic Support has come out to acknowledge this problem once more, noting that they’re aware of this bug and are working on a fix. 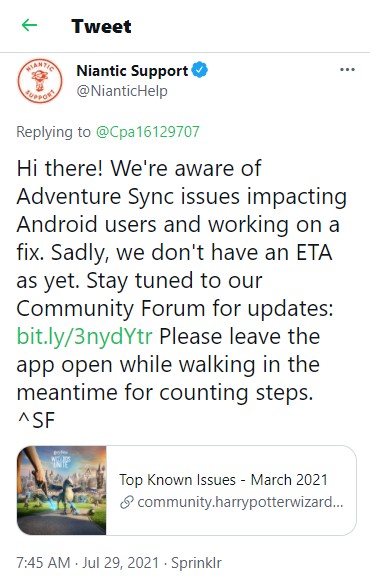 Hi there! We’re aware of Adventure Sync issues impacting Android users and working on a fix. Sadly, we don’t have an ETA as yet. Stay tuned to our Community Forum for updates: http://bit.ly/3nydYtr Please leave the app open while walking in the meantime for counting steps.
Source

Well, even after this recent update, this issue seems to continue to afflict players. Even then, there isn’t an ETA and Niantic says they can’t provide this info just yet. In the meantime, players are advised to keep the app open while walking.

It is unfortunate that this issue has dragged on for this long and we can only hope to see Niantic coming up with a proper fix sooner rather than later.

In the meantime, it has been reported that in some cases, toggling the Adventure Sync button on and off has resolved this issue so this could be something affected players might want to try.

NOTE: We have these and many more gaming stories in our dedicated Gaming section so check it out for more.