Clubhouse has recently been in the headlines of many news outlets. The invite-only chat application lets you drop in and listen to conversations between people live.

Unlike listening to podcasts, Clubhouse is where you can listen to some of the most influential people in the world or anyone else for that matter without edits, re-takes, and scripts.

The app reportedly exploded in popularity thanks to Elon Musk who joined in on a conversation on The Good Time Show, a late-night chat hosted by Andreessen Horowitz General Partner Sriram Krishnan.

The SpaceX founder and Tesla CEO also invited President Putin to join him in a conversation on the Clubhouse chat app via a tweet. That said, Clubhouse has been installed by millions and is growing daily.

This massive growth comes despite the application being only available on iOS. Further, the Clubhouse developers have not yet made any suggestions for us to believe that the app will be available on Android anytime soon.

But Android users shouldn’t feel left out. That’s because a few other app makers are looking to ride the wave created by Clubhouse and we’ve listed a few below. The most popular of which is by Twitter. 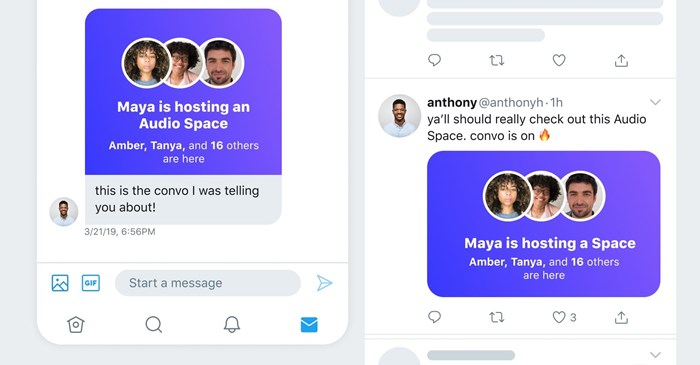 Twitter started experimenting with its new Clubhouse competitor called “Spaces” in towards the tail end of December. It shared a few details regarding the availability of Spaces and the features that are being tested in a tweet-thread.

Much like Clubhouse, the feature was only available to iOS users. However, Twitter recently announced that the beta testing for its Clubhouse competitor has gone live for Android users as well.

According to the official tweet, Android users will be able to join and talk in any Space right away. However, there’s a huge caveat right now since folks with Android devices can’t host Spaces. That said, all features should soon be available to Android users as well. While Spaces isn’t as widely used as Clubhouse (at the moment), it practically offers the same live chat experience.

All you need to get started with Spaces is the Twitter application on your Android phone. It can be downloaded via the Google Play Store if you don’t have it installed already. InstaHelo is a dedicated drop-in audio chat application available on Android that is an excellent alternative to Clubhouse.

The app lets you join rooms to chat with others or even host your own room to talk about anything that interests you. Moreover, unlike Clubhouse, the app is available for everyone without the need for special codes.

All you need is an Android smartphone running Android 7.1 or later to get started with InstaHelo. Of course, you may not find big names like Elon Musk or Bill Gates here but everyone has to start from someplace, right?

InstaHelo is free to use and can be downloaded directly from the Google Play Store. This is not an official application that can be downloaded for the Google Play Store. Instead, you’d have to sideload the app by downloading an APK file.

The application is more of a workaround rather than a proper alternative to Clubhouse since it basically tricks Clubhouse into believing that the user is on an iOS device as per a report.

Houseclub was created in one day by a Russian programmer — Grigori. The app’s source code is available for the public to check out on GitHub.

You can also download the APK file for this Clubhouse alternative on Android by clicking here (version 1.0.8). Do note that using this app may result in your Clubhouse account getting banned.

10:45 am (IST): Instagram is apparently testing a Clubhouse-like feature — dubbed “Audio Rooms” — that will let users interact with one another in a similar fashion to Clubhouse.

Alessandro Paluzzi, a developer, shared screenshots of the Audio Rooms after reverse engineering the app to enable the hidden strings. We’ve shared a couple of screenshots below: 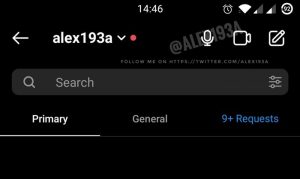 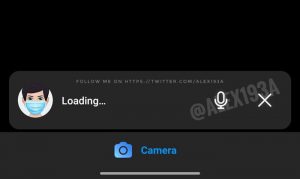 Apart from that, there are a few other Clubhouse alternatives on that rise that you may want to give a shot. These are Wavve, Spoon, Discord, and Riffr.

12:34 pm (IST): As we’ve mentioned above, Twitter Spaces can be hosted by a limited set of users at the time. However, a fresh report from The Verge suggests that Twitter might allow anyone to hose a Space starting in April.

Until then, iOS and Android users can join existing Spaces and interact as usual. It’s also worth noting that Twitter has not guaranteed that everyone would be able to host Spaces in April, although it’s what they’re aiming for.

07:45 pm (IST): As per a recent report from Twitter, Telegram might also be developing the Clubhouse-like voice chat feature for its channels. Check out the complete coverage here.

11:28 am (IST): A new Telegram update for Android and iOS is now out with Voice Chat 2.0 which packs a lot of new features. Check out the complete coverage by heading over here.

11:23 am (IST): Clubhouse co-founder, Paul Davison, revealed that the company is working “really hard” to bring the app to Android. However, it will likely only be available after a couple of months, as per a report.

Meanwhile, Android users are warned to stay away from certain fake malware-spreading apps and websites that are disguised as Clubhouse for Android.

04:32 pm (IST): Spotify is looking to host live audio conversations and recently acquired Betty Labs for the purpose. Betty Labs is the company behind the live sports audio app Locker Room. Spotify didn’t disclose how much it spent on the purchase.

Following this acquisition, the Locker Room app will stay on the App Store but will be rebranded in the future.

All users will be able to send payments today, and we’ll be rolling out the ability to receive payments in waves, starting with a small test group today.

The feature, for now, is limited to iOS as the app is yet to land on Android devices. But once it supports Android, users should be able to enjoy the monetization feature as well.

09:53 am (IST): In case you’re still looking out for some more Clubhouse alternatives for Android, then check out Stereo, Cappuccino, and Anchor. The best show on Stereo can even get a weekly cash prize of $20,000. So get cracking to stand a chance to win a boatload of money.

05:45 pm (IST): Facebook has reportedly started beta testing a new app called “Hotline” which is set to be a Clubhouse rival. The app even lets listeners react with emoji (similar to the existing options on Facebook).

06:50 pm (IST): Clubhouse CEO Paul Davison has issued a public statement claiming that the report about the app suffering a data breach is completely false.

He claims that the data is already publicly available and can be accessed by anyone through their API as per a report from The Verge.

03:33 pm (IST): Mopewa, a developer responsible for the development of Clubhouse for Android, recently teased the Android version on Twitter. And with a retweet to her post, Morgan Evetts added a rough release date of May. So we can expect to see the official Android app go live next month. 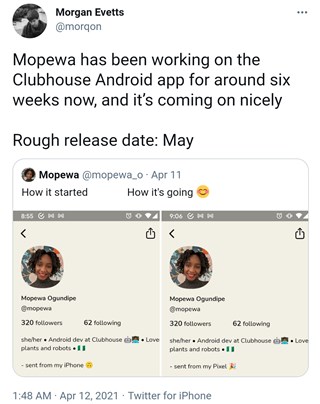 11:40 am (IST): Reddit also has Clubhouse in its crosshairs. The social platform announced Reddit Talk on Monday that lets users host audio conversations within their communities.

At present, only mods will be able to host audio conversations for Q&As, AMAs, lectures, sports-radio-style discussions, community feedback sessions, or simply to give community members a place to hang out.

Talks live within communities and, during early tests, only a community’s moderators will be able to start a talk

10:04 am (IST): Some users on Twitter’s official app for Android (non-beta) can now create and host Spaces as per a fresh report.

Clubhouse has now started beta testing its Android app, but only select users have it. Below is part of the statement released by the company regarding this development:

Android is not yet live, but we started rolling a rough beta version out to a handful of friendly testers. If you hear someone saying they are using Clubhouse on the official Android app, please give them a warm welcome! We cannot wait to welcome more Android users to Clubhouse over the coming weeks. 🙂 🎉
Source

The makers of Chingari, a short video sharing platform, have now released a new app called Fireside on both Android and iOS platforms.

Fireside is yet another Clubhouse alternative that lets users host virtual rooms to kick-start conversations with others.

Clubhouse is finally out for Android in the U.S. and interested users elsewhere can pre-register for it on the Google Play Store. The app is still in its beta phase and will gradually roll out in other English-speaking countries soon followed by the rest of the world as per a report.

Folks in the UK and Canada who’ve been waiting to try out Clubhouse on Android will be pleased to know that the app is now available on the Google Play Store as per a report.

It will also be available in other English-speaking countries, however, Clubhouse hasn’t revealed a complete list.

Turns out, the other English-speaking countries where Clubhouse is now available are Australia and New Zealand. Of course, we expect to see the app rollout in other countries soon. Clubhouse has confirmed that the app will be available in Japan, Brazil, and Russia this coming Tuesday. Nigeria and India will get support on Friday morning. The rest of the world will get it throughout the week and the global rollout should be wrapped up by Friday afternoon. Clubhose is now available for Android users around the world. But it’s still an invite-only app. Hence, you’ll need an invite code to get started. The announcement was made on it’s official Twitter handle.