Details of the upcoming Samsung Galaxy Tab S7 Lite have once again been leaked, revealing that it would come with five color options and two S-pen holsters.

The latest reveal drew excitement and confusion as the Galaxy Tab S7+ Lite does not only follow its predecessor’s naming convention, the addition of “+” in the “Lite” series seemed like it is canceling each other.

The leaked renders of Samsung Galaxy Tab S7+ Lite show that the five color options would include shades of blue, white, green, pink, and the previously leaked black color.

On Wednesday, May 5, reputed tipster Evan Blass also leaked mock-ups of the Galaxy Tab S7+ Lite in pink color, along with a Book Cover and an S-pen stylus in matching color.

The leak also shows the two S-pen holsters, with one carved below the dual camera array and the other placed inside, along the book cover’s spine.

Additionally, the leak shows the power and volume keys at the right side of Galaxy Tab S7+ Lite’s frame, as well as the USB-C port and speaker at the bottom.

Moreover, leaker Roland Quandt defends the name chosen for the Galaxy Tab S7+ Lite, pointing out that the “+” indicates the larger than usual screen size and “Lite” suggests it is less powerful than the flagship model.

guys, it is pretty easy… S7+ Lite because: + specifies 12.4″ screen size, lite bc less powerfull than regular S7+. Nothing that crazy about it.

Quandt’s reveal makes much more sense, given that prior leaks suggest that the upcoming Samsung tablet could have been named Galaxy Tab S8e. 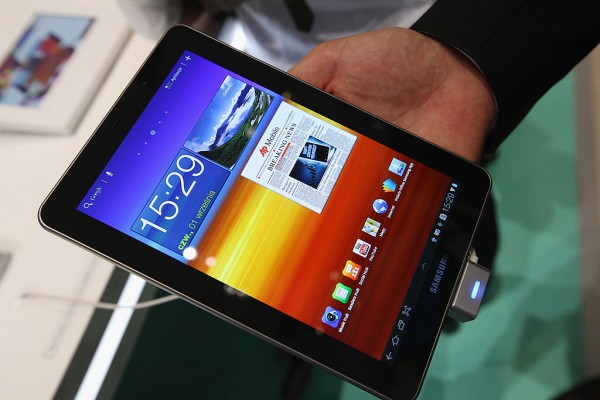 (Photo : Sean Gallup/Getty Images)
BERLIN, GERMANY – SEPTEMBER 01: Visitors try out a Samsung Galaxy Tab 7.7 tablet at the Samsung hall at the IFA 2011 consumer electonics and appliances trade fair the day before the fair’s official opening on September 1, 2011 in Berlin, Germany.

Details about the upcoming Samsung Galaxy Tab S7+ Lite are still under wraps, but previous leaks and rumors suggest that it would come with a 12.4-inch IPS LCD screen with equal-sized bezels.

According to Sam Mobile‘s report on Jan. 22, the Galaxy Tab S7+ Lite would be launched in Wi-Fi, LTE, and 5G variants, and would likely come with One UI 3.1 based Android 11 OS.

The Galaxy Tab S7+ Lite is also rumored to be powered by Snapdragon 750G processor supported with 4GB RAM.

Other technical details such as its storage option, battery capacity, and camera configurations have not yet been revealed.

Some rumors suggest that the upcoming Samsung tablet would be launched in late May or June 2021, and as a mid-range tablet, its price is speculated to be around $349 to $499.

The price speculation was based on rumors that it would not have any significant upgrade, and that Samsun had been making their products cheaper since the release of the Galaxy S20 models.