Parler offline, app not working or down? Here’s what’s happening

This story is being continuously updated….

Original story (published on May 06) follows:

Parler — the controversial social media platform — aims to take on Facebook, Twitter, and other social media sites and apps by claiming to encourage and support free speech.

So far, things haven’t been going well for Parler since the app was banished from the App Store and Google Play Store and even lost its AWS hosting due to violent threats that were made on the platform earlier this year.

That said, after roughly a month of downtime, Parler came online again in February. Although the app still isn’t listed on the Play Store and App Store.

However, it now seems that Parler has been taken offline again as the app and website are not working or down. Users have taken to Twitter (oh boy, the irony) to seek more information regarding the situation. Any body know why Parler is not working? (Source)

Anybody know what happened to Parler, ? not working! (Source)

Users who are trying to visit the Parler website are being served a notice stating that “the team is hard at work, tidying up, and bringing you some cool changes…” 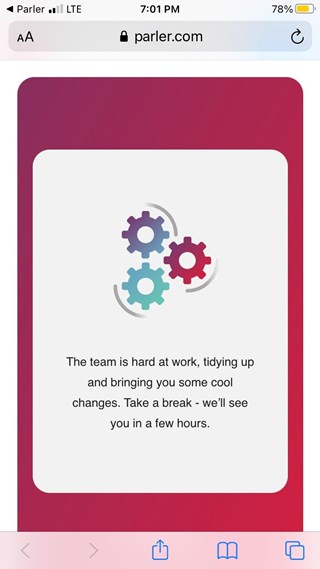 Parler — on Twitter — did confirm that they’re working on some enhancements to the core system and that the website should be online by 7 am PST. In a follow-up tweet, Parler claimed they’ll be up in 2 hours, however, it has been several hours and the site remains inaccessible.

UPDATE: The tech team is saying we might be offline for up to 2 more hours, until 9 am PT #parler (Source)

While it’s clear that the Parler app and website are down due to maintenance, information coming from Candace Owens suggests that Parler will be getting a brand new app next week. This could be the reason why Parler is down and not working at the moment as they’re getting set to release the brand new app.

As usual, we’ll post an update if and when there are any further developments regarding the status of Parler.

Even after hours, Parler still continues to throw the same notification. Looks like users will have to wait more.

The site is back up.

Apparently, things are broken again as Parler is now throwing an error stating – https://www.google.com/ you are logged out

The site is now up and running.

Going by user reports dated today, many are still not able to access Parler for some reason.

Has Parler been taken down again??
source

So is Parler down again? Haven’t been able to get on for a couple of days
source

If user reports are to go by Parler continues to remain offline for many. While there is no status update from their team on Twitter, here are some of the alternatives that you can try hands-on:

The team Parler has tweaked the message on the website which may explain why some users are still complaining. They say:

The team at Parler is hard at work creating a great new experience for our users. Give us a bit of time and you’ll soon notice some great upgrades.

Join today and start enjoying social media the way you always wanted it to be.

Latest reports from users suggest that while some of them are able to access the service through the Parler website, for others even the website is completely broken.

Parlor, the app with an “o” instead of “e,” received a surge in downloads a few months back, when Google and Apple closed the doors for the actual Parler app.

Going by what a user claims, Parlor is the back door Parler and it takes you to the actual app after login. Here’s what the user says:

Is it the old app or the new app? The new app is called Parlor, but has the back-door feature

Parlor is a back door to Parler. They changed the name to get over Apples censorship.

After you download the new app delete the old app. When you do you’ll be able to login to the new Parlor using your old info and it’ll reboot as Parler. If you have the old app in your phone it won’t work because the old app is trying to use the old servers.

We’re not sure how true the user claim is, but you may give it a shot (at your own risk).

Here’s a user shared image of the notification they get to see on accessing Parler.

The wait is finally over for Apple users as Parler app is back on the App Store. However, the posts labeled as “hate” won’t show up for iPhone/iPad users.

FYI Team Parler is still trying to convince Apple to permit iOS users the ability to see hate speech, but banning it was one of the conditions for the app’s come back on the App Store.

The app is yet to make its way back to the Google Play Store and here’s everything we know about the situation at the moment.

Just in case you’re not aware, Android users can side-load Parler app from the website.

Users are reporting multiple issues (with CAPTCHA and login confirmation) with Parler which has made using the service difficult. Here’s how a user puts it: Parler has now officially confirmed the Android app is now available for sideloading (outside the Google Play Store). Here is what the official page says:

Installing the Parler App on Android Devices Outside the Google Play Store (Sideloading)
The Parler app for Android is available for devices running Android OS 5 or later.

Apps distributed outside the Google Play Store are flagged as coming from “unknown sources.” This doesn’t mean they’re dangerous; they’re simply not monitored or financially tied to Google. So long as you obtain apps through trusted sources, sideloading is a safe alternative to get the apps you love.

The Parler app for Android is available for sideloading. Parler can only support the one downloaded from this specific page.

We are working on this issue. If you’re on iOS, please delete the app from your device and reinstall it – this fixes the issue much of the time. 🙂

Here’s a user-shared image regarding some of the problems being worked on:

For those of you facing loading issues with the iOS app, Parler suggests you to uninstall the app and then re-install it again.