Asus is still very much an also-ran in the smartphone world, but that gives it the space to try some unconventional designs that many find appealing. Take, for example, the Zenfone 6 and later, which elegantly solves the aesthetic issue of the notch by making its rear camera module flip around to the front when needed. Personally, I think it makes the Zenfone series some of the best-looking Android hardware there is. Asus isn’t quite done with this design yet, according to a newly-leaked render of the unannounced ZenFone 8 Flip. We’ve also got a few more details on the regular ZenFone 8.

91 Mobiles and noted leaker Ishan Agrawal got their hands on some official art of the upcoming device, along with alleged specifications. The basic layout remains the same, keeping that beautiful, uninterrupted edge-to-edge screen by placing the triple rear camera module on a motorized hinge. It flips it forward for selfies and video conferencing. 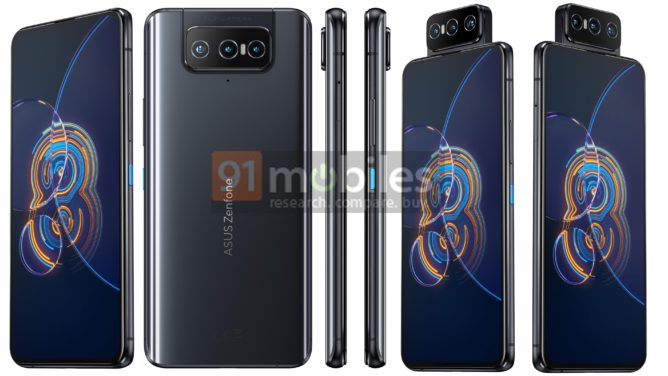 According to the leak, the new model uses a top-of-the-line Snapdragon 888 processor, a large 6.67-inch 1080p AMOLED screen with 90Hz of refresh, 8GB of RAM, and a generous 256GB of storage. Those rear cameras are 64MP, 8MP, and 12MP, for primary, telephoto, and macro lenses, respectively. The battery is the same massive 5000mAh it was last year (a neat trick, considering the extra volume of the camera module) with added 30-watt fast charging. 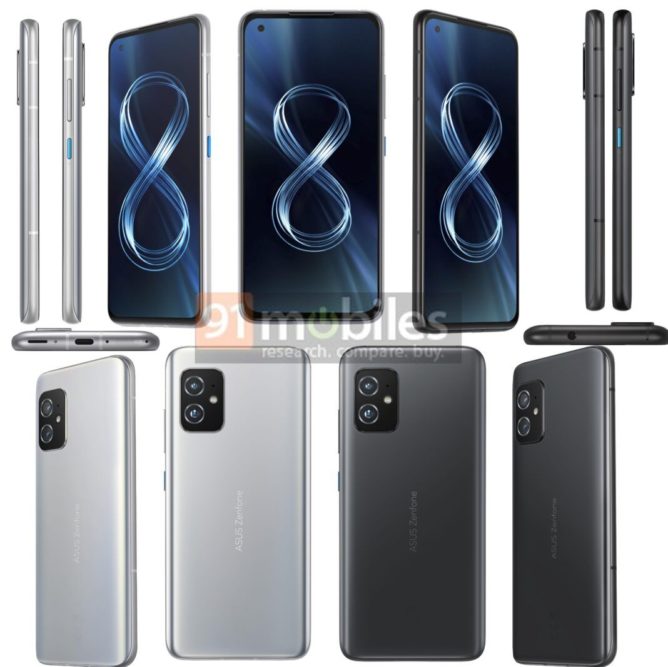 In recent years Asus released a standard and Pro model of the Zenfone, both with the fancy camera, but this year’s non-pro phone uses a more conventional slate design with a hole punch front-facing cam.

As leaker Mukul Sharma writes on Twitter (via XDA), the Zenfone 8, sans Flip or Pro modifier, is considerably smaller at just 5.92 inches on the screen. Interestingly, it’s supposed to have a higher refresh rate at 120Hz, sporting one of Samsung’s latest E4 screens. The ZenFone 8 uses the same powerful processor and RAM, but halves the storage to a still-impressive 128GB, though it looks like there are versions available with up to 16GB of RAM and 256GB of UFS 3.1 storage.

The dual 64MP IMX686 primary and 12MP wide angle cameras on the rear are fixed, and the dedicated macro lens is dropped. The hole punch camera is supposed to have 12MP. The phone uses a 4000mAh battery with the same 30-watt charging. It also checks all the other usual boxes, like USB Type-C support, dual speakers, 5G connectivity, Bluetooth 5.2, Wi-Fi 6, and FM radio support thanks to the inclusion of a rare port: a 3.5mm headphone jack.

Agrawal says that both phones will be launching globally on May 12th. Prices and specific territories aren’t known, but for the sake of comparison, last year’s Zenfone 7 Pro went for just under $1000.

We’ve updated the article with more details about the regular ZenFone 8.