The Android 12 beta 1 update has been around for quite some time now, while the wait is on for the second beta update.

While there are several bugs and issues in the beta 1 update as expected, most users still like the changes in the upcoming OS update.

So, Google is now asking users of the Android 12 beta 1 update to share their feedback.

before users can start with the software survey, they have to select the device on which they using Android 12 beta 1.

After that, the survey asks for opinions on the new UI design and features in Android 12. These include the Quick Settings and Notification panel design/UI changes along with the new Volume panel. Users can also provide additional feedback in the form of suggestions further expanding their opinions. The next part focuses on some of the major parameters of Android 12.

Users can rate these parameter by choosing one of the six available options between very dissatisfied and no opinion. 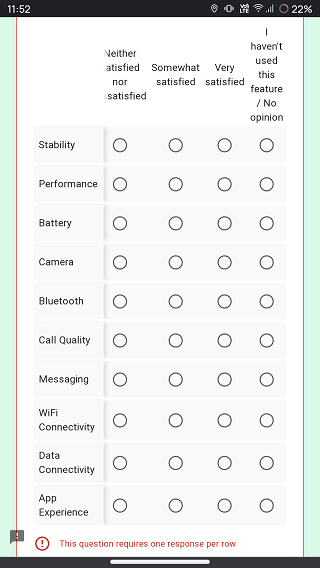 The survey then seeks feedback on the issues and bugs experienced by Android 12 beta users.

This where users can provide the most relevant of information to Google as doing so can further help to refine the upcoming Android 12 builds.

So, if you are an Android 12 beta user, you can also share your feedback about it with Google via this link.

That said, we are constantly tracking the development of Android 12 and will be back with more updates.

In the meantime, you can check out our Android 12 update tracker for Google Pixel devices to get the latest updates on the matter.